I took a Buzzfeed quiz the other day that claimed based on your answers to their questions they could tell you how many kids you would have. My answer was 0, but a lot of pets. Buzzfeed is obviously tracking my Amazon purchases. I love pets. Definitely, more than kids. If your kid gets in my way, I’ll give you a dirty look. But if your dog gets in my way, I’ll ask if I can pet it.

I had adopted a puppy in college. He was adorable. But as he got older, he was proving to be aggressive and untrainable. I had brought him to three different trainers, read everything I could about dog behavior, talked with SPCA where I adopted him from, was consulted by dog behaviorist, talked with his vet, I felt like I had tried everything. But, my parents made me give him up, so I found him a family in Erie that had the means to care for a very large, aggressive dog. I regret that decision everyday. I always wonder if there was something more I could’ve done. And, that experience had scarred me. I didn’t want to adopt another animal and feel like I failed them.

After about a year of living in New York City, I realized that I didn’t like life without a pet. I had always had a pet and I missed having a companion. I was still scared to adopt a dog and I was always busy around the city, so I decided a cat would be better for my lifestyle. I looked at all of the small, boutique rescues in New York City first, thinking they would have nicer cats since they were coming from foster homes not a shelter. But, those rescues did not seem interested in adopting their cats to anyone who didn’t meet their requirements. And, even when I did meet them, they came up with some other excuse. After a lot of thought, I decided to give the ASPCA a chance. It wasn’t the same organization my first dog was from, but for some reason in my mind it was and that gave me a lot of anxiety.

When I went it and filled out the cat personality questionnaire, I made it clear I wanted a nice, fat, lazy, old cat. I thought that I would be a miracle adopter because I didn’t want a kitten I wanted an old cat. But, they didn’t really have any interest in showing me old cats because it was “kitten season” according to the adoption agent. So, we went to the kitten area. I wasn’t sold on getting a kitten. I didn’t know much about cats and a kitten seemed like a lot of work. I looked a few kittens and nothing really interested me. Until I saw a kitten named Robyn, she was laying on her back showing off the dots on her stomach and as I passed the cage she perked up. I asked to see her and then minute I was holding her she was purring. All I could thinks was “F*CK! I have to get this kitten.” I brought Robyn home and renamed her Minou (because I think I’m funny). 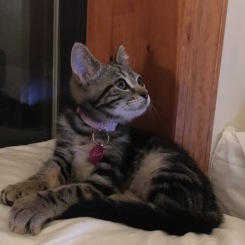 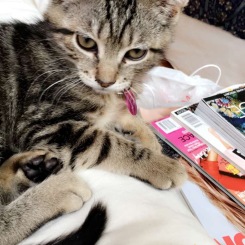 She was my baby. But, I’m not going to lie she was a piece of work. Luckily, she got the litter box down ASAP. But, everything else was like this girl was testing my patience. She would throw her food instead of eating it. She would bathe in her water instead of drinking it. My entire room was covered in cat food and water. She could not leave anything standing upright. She had to knock everything off as I tried to get ready for work. She would run back and forth on top of me from 11pm-4am every night. She would climb up my clothes ripping out every thread with her claws. She was a terror. But, when she wanted to cuddle, it made everything worth it. And with time, she became the fat, lazy, cuddly cat I’d always wanted. And, now every once in a while she’ll knock something over just to piss me off and remember her younger self. 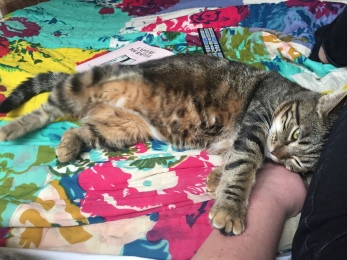 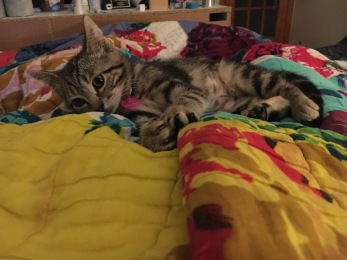 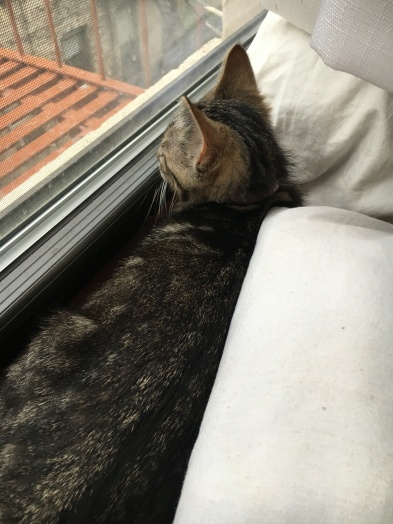 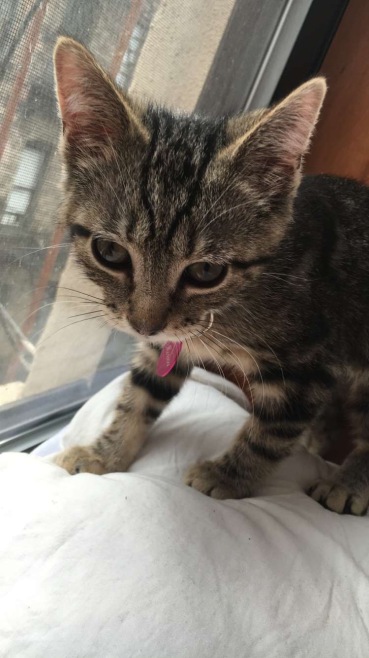 After about a year of having Minou, I realized we both could use another companion. She would get separation anxiety while I was at work and I wanted a companion I could travel with and would get me out of the house more. I looked far and wide for a chihuahua. I had looked at every dog rescue that I could get to by train or bus. I had actually found a rat terrier that I had asked to apply for. But, I was upset I wouldn’t get to meet him first. So, I decided to go to the ASPCA just to meet some dogs and see if they possibly had anyone who fit what I was looking for. I went and I met a lot of great dogs, but they weren’t a match for what I wanted. I was looking for an animal who I could easily travel with and who could be my sidekick everywhere I went. Once again, I didn’t want a puppy. I wanted an older dog, whose personality I could already see. I was not ready to adopt a puppy and have it fail again. But, we passed a room with a litter of big, brown puppies sleeping and one little tiny, tan chihuahua right in the middle of the cuddle pile. That was it. I was getting that chihuahua puppy. Two weeks later, after he went through behavior evaluations, Quito came home with me and became Richard. 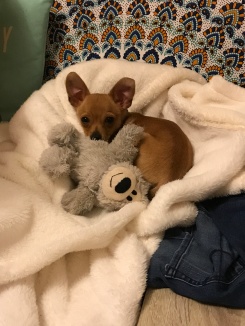 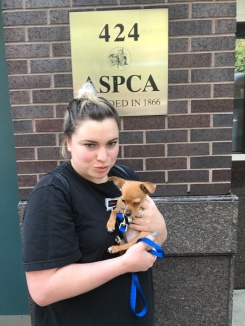 And it was anything but a walk in the park. At first, Richard was this cute, 3lbs chihuahua who loved everybody and everything. He never wanted to be out of someone’s arms and he couldn’t get enough of the attention. I was in love. He was everything I could’ve ever wanted.

But, at around 5 months everything took a turn for the worst. At around 5 months old, dogs go through a sort of “stranger danger” phase. Everything becomes scary. Small dogs also some times develop small dog syndrome. People don’t respect them because they are so small and their biting doesn’t hurt, so they feel the need to lash out more and harder. Those two behavioral issues paired with one bad walker made Richard into the chihuahua from hell. He lashed out at everything and everyone. He’d want to be close to you, but then the minute you touched him he’d bite you. He was nuts.

I hadn’t realized until the behavior became extremely bad that it might be the walker. I asked the ASPCA for help and they let us come in to see their behavioral specialist. I asked our vet for help. And in both cases, they said something has to have traumatized him to make him behave like this. The behavior was learned. But, nothing that I was doing should have triggered a response like that.

So, I asked the walker. And even though he claimed there was no one traumatizing experience that could’ve triggered this behavior, he did admit that Rich would snap at him when he was putting the harness on and when he would pick him up to leave the dog park. When I told the vet, he agreed this was where Rich had learned to that those things being touched and having a harness put on trigger aggression. It was devastating. I was having serious Post-puppy Depression. I was starting to question if I had gotten in over my head again. I was now going to have to spend months reconditioning my dog to these triggers. He wasn’t just going to have to go to puppy classes and learn sit and stay. He was going to have to relearn that being touched and held is a good thing.

Having two pets in a tiny apartment in the city isn’t exactly what I pictured. It’s much more crazy. But, it’s a lot of fun. I have the two weirdest kids. They’re both assholes in their own right, but they’re my little assholes. I think getting through training both of them, and having my patience tested at every turn, only makes them more special. I can’t say I’d recommend it to anyone, but it’s my kind of crazy. 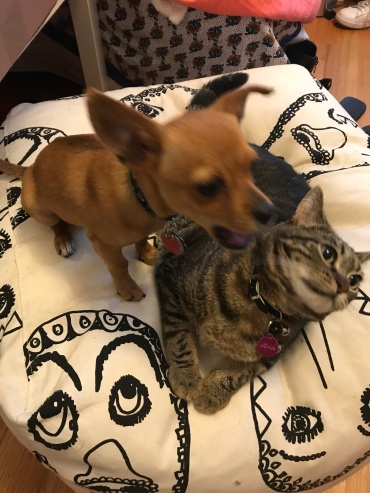