On Thanksgiving this year, I got to check another item off my bucket list. I finally got to go to the Macy’s Thanksgiving Day Parade. I have been watching the parade for as long as I can remember (by watching I mean recording and fast-forwarding to the good parts). And, this year I decided to wake up at a time my body has never experienced before (sober) to line up on the cold city streets and watch the parade.

Before going to the parade, I did a lot of research about where to stand, what time to get there, what to bring and what to expect. All of that information was wrong. Apparently those bloggers haven’t been to the parade in a couple years because everything has changed. This year was a little different too because the whole city is still on high alert at all times.

The first thing I read from several sources was that Columbus Circle is the best place to stand to see the parade. Wrong. Columbus Circle was completely closed off unless you were one of the lucky Macy’s employees or someone extra special who got tickets into the stands. So after showing up at Columbus Circle and asking a few police officers where I could stand to see the parade (they all gave different wrong answers), I started following a crowd of people towards Central Park West. Turns out, we actually found the best place to stand. We stood right at the corner of Central Park West and 86th Street on the park side. It was a great spot because it’s right where the bands and dancers perform. The crosswalk to the park side is closed off early, so you have to get there earlier, but it’s worth getting there a bit earlier because that side is much less crowded than the other side of the street.

Another tip I read from several sources, was to get there at around 6a.m. Wrong (Kind of). This depends on how close you want to be. I wanted to be as close as I could get. I arrived at around 5:45 and I secured the last foot of space left along the barricades. Apparently throwing your blanket over the barricade is the universal sign that the territory is claimed by the blue blanket tribe momentarily away to get coffee. But, if you’re fine with being a bit farther back showing up anytime before 6:30 and sitting on the park side will get you close enough to see all of the action.

Also, don’t forget to dress warm because you will be standing still for hours before the sun comes up and even if it only seems a little chilly when you leave your house, it will seem a lot colder when you’re waiting for the parade to start. Lots of people came prepared for a full day of camping along the barricades. People came with blankets, chairs, food, coffee, games to distract the kids while they wait, etc. Come prepared. It’s a long wait until the parade starts.

Once the parade starts, you forget the hours you spent waiting for it. TV does not do the parade justice. You cannot imagine how large the floats are in real life. As they came down the street, some seemed bigger than the buildings. The amount of teamwork it takes to control the floats is incredible. We also got the perfect spot to see all the bands and dancers perform. There was everything from marching bands to comical guys in short shorts dancing, and of course the celebrities waving as they pass. It was definitely worth the wait and waking up early.

The best thing about watching the parade from the Upper Westside, it’s over by 11a.m. The parade ends early and if you’re on the park side you can start a mad dash to the bathrooms in the park when the parade is over. Then you have the rest of the day to enjoy with your family, or finally get some sleep. 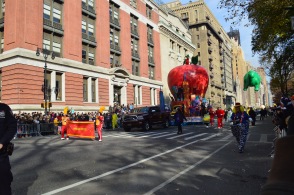 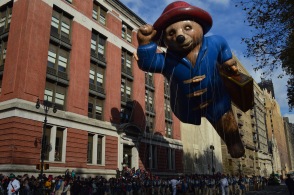 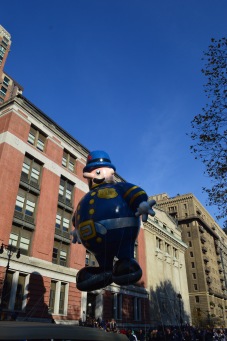 Want any more tips about the parade? Just comment below!